Cote d’Ivoire has moved up 21 places in the prosperity rankings since 2010, with impressive improvements in governance and many other aspects of institutional, economic, and social wellbeing. 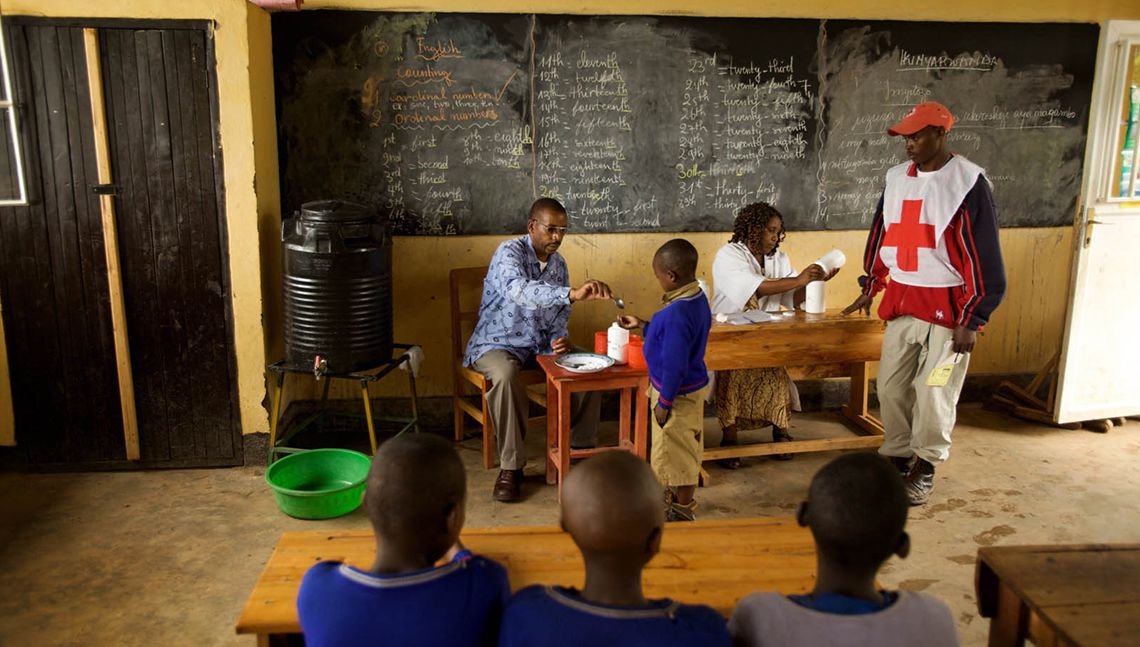 The Prosperity Index captures the quality of people’s lived experiences and the features that enable individuals to reach their full potential. In particular, the Index’s Empowered People domain assesses the necessary resources required for a basic level of wellbeing, ranging from levels of material resources, to adequate nutrition, to the outcomes, access, and quality, of health and education systems, and to a safe and clean environment. Many of these issues are inter-related, but each of the pillars in this domain differentiate countries’ performance on these fundamental measures of social wellbeing.

The story of social wellbeing across the world is a positive one. Today, there are more than half a billion fewer people living under the World Bank’s absolute poverty line of $1.90 per day than there were 10 years ago. Levels of health and education, both in terms of access and quality, have also improved significantly.

These improvements seem to be occurring regardless of short-term changes within each country — such as deteriorations in macroeconomic stability or policies. While some of the improvement can be attributed to the impact of aid, the correlation is weak.

On the other hand, analysis of the Index shows that the strength of institutions has a stronger relationship than aid with social wellbeing in the long-term, and this points to where the greatest development leverage is likely to lie.

These improvements across the Empowered People domain of the Prosperity Index are impressively widespread, verging on universal in some aspects. In both the Living Conditions and Education pillars, more than 85% of countries saw an improvement over the last 10 years. In 121 countries, the proportion of people with access to clean cooking fuels and technologies has increased, reaching 60% globally; the number of people with access to electricity has grown by over a billion during the same period.

These improvements across the Empowered People domain of the Prosperity Index are impressively widespread, verging on universal in some aspects.

Education systems are affording more people the opportunity to learn, with higher enrolment rates at each learning stage, and women are spending more years in school on average. The proportion of people completing tertiary education has increased in 100 countries and is approaching 50% globally, up from 33% in 2009.

Improvements in health have been even more prevalent, visible in more than 90% of countries. Preventative health interventions, such as vaccination programmes, are more widespread than they were a decade ago. Partially as a result of improved care systems, mortality has declined across age-groups, with life expectancy at the age of 60 continuing to increase, as well as a reduction in infant and maternal mortality rates. An additional 10 percent of births were attended by skilled staff in 2019 compared with 2009. Furthermore, people across the world are becoming more satisfied with the healthcare they are receiving.

This improvement in social wellbeing is much more geographically widespread than that seen in the other pillars of prosperity. The Market Access and Infrastructure pillar is the only other pillar that has exhibited such widespread improvement, due in large part to the rapid and ongoing improvements in communications infrastructure. Only seven countries in the world experienced deteriorations in two or more of the Health, Education, and Living Conditions pillars.

The two notable cases of broad decline are Syria (157th) and Venezuela (143rd); in both cases, a dramatic systems collapse has led to a deterioration in each of education, health, and living conditions.

For most countries, progress in the Health, Education, and Living Conditions pillars is relatively independent of progress in the other pillars of the Index. Unlike the relationship between improving governance and economic quality, we find that health and education tend to improve irrespective of economic and institutional pillars. For example, though violent crime has become more prevalent and personal freedoms have been eroded in Afghanistan (163rd) over the last decade, approximately 24 million additional people have access to electricity. Likewise, though Argentina (59th) has seen a substantial decline in macroeconomic stability, infant mortality has fallen by a third, and 90% of children now enrol in secondary school, up from 80% in 2009.

This trend is evident in countries such as Mongolia (87th); though its productive capacity has declined over the last 10 years, pre-primary enrolment rates have almost doubled to 84%. Similarly, while the Philippines’ (84th) productive capacity has declined by an average of 2.8% per year since 2009, the proportion of births attended by skilled health staff has climbed from 62% to 84%, and maternal mortality is less prevalent.

The direction of aid

One thesis to explain this improvement and convergence is that aid is more prevalent in places where the need is greatest – and hence drives the improvement. Issues such as living conditions, health and education are, and have been for some time, major focusses of Official Development Assistance (ODA). Between the turn of the millennium and the end of 2017, $1.4 trillion (constant 2017 USD) had been channelled into humanitarian and development efforts, much of which has been directed at living conditions, health, and education.

One explanation for the focus on these areas is that there is a direct and immediate potential for tangible improvement, sitting as they do at the nexus of humanitarian and developmental efforts. When we look at issues such as access to running water, healthcare systems, and the provision of materials for education, we are looking at factors that have explicit impact on human development.

Between the turn of the millennium and the end of 2017, $1.4 trillion (constant 2017 USD) had been channelled into humanitarian and development efforts

However, across the full spectrum, this relationship is only modest and with many exceptions to the pattern; the amount of ODA that countries receive is only 24% related to their wealth levels, 17% related to education levels, 13% to health levels, and only 7% to living conditions levels.

We find that 10-year improvements in any of the health, education, and living conditions pillars are not well explained by the amount of ODA received by a particular country (especially when accounting for the underlying convergence pattern that we see). For example, though Suriname (82nd) receives over $100 per capita in ODA, it experienced a deterioration in the Education pillar. On the other hand, both Bangladesh (127th) and Ecuador (80th) receive less than $13 of ODA per capita and have experienced some of the most substantial improvements in education. While aid no doubt has a direct impact for the beneficiaries, on its own, it does not appear to be playing a game-changing role on a national scale in the short-term.

If aid is not playing the central role, the question remains: what is driving the convergence that we have observed? Within the bottom half of countries by GDP per capita, the level of expenditure on health varies. We find that for a given level of national income, health expenditure as a percentage of GDP correlates with performance on the Health pillar. Honduras (107th), for example, spends more money (as a proportion of GDP) on health than the average for these less-wealthy countries, and in turn has a much higher score in the Health pillar than one would expect.

We also see that where government administrations are more effective, education is stronger. Among the countries in the lower half of GDP rankings, government investment in education varies significantly, from 1.2% to 11.3% of GDP. For a given level of national income, education expenditure (as a percentage of GDP) positively correlates with a higher education score within the Index – more strongly than for health.

In many successfully developing countries, such as Botswana (76th), there has been deliberate engagement in exercising governance over the education system, even in an environment where aid funds were available. A further example of government engagement with the education system having a tangible impact is that of Lesotho (133rd), which has a relatively high education expenditure at 11.3%, and has an education score higher than would be expected for its low GDP per capita. In a similar vein, but at the other end of the spectrum, the Central African Republic (165th) spends only 1.29% of GDP on education, and is among the weakest countries at each stage of the education system.

These examples illustrate the broader pattern we have observed that stronger institutions are associated with better living conditions, health and education. At a national level, the relationship between institutions and people’s lived experience is stronger than either ODA or GDP per capita.

We should celebrate the improvements in living conditions, health, and education around the world, and particularly in the weaker-performing countries. Despite the somewhat independent nature of the development of these pillars across nations, we should not regard them as outside the purview and responsibilities of national governments.

Official development assistance is directed towards those countries with greater social wellbeing needs, but it is more directed towards those countries with lower GDP per capita. However, in contrast to the observed relationship between institutional strength and the lived experience, the impact of ODA is not observed on a national scale. Therefore, greater focus from the international community on strengthening fragile institutions and building government effectiveness should be considered.

We should celebrate the improvements in living conditions, health, and education around the world, and particularly in the weaker-performing countries.

There are already signs of a shift in the focus of aid — in both donor and recipient countries — from symptomatic treatment to building capacity. The UK government’s “Beyond Aid: The UK’s strategic engagement in Africa” inquiry, USAID’s “Journey to Self-Reliance”, and the “Africa beyond aid” agenda spearheaded by Ghana’s President Akufo-Addo highlight a convergence in ambitions that has a focus on “people as changemakers”.

This should not detract from the clear and tangible benefits in responding to humanitarian crises with aid, but, as Prosperity Index data suggests, it is more effective in the long term to work actively to develop institutional capacity. When considering investments in enhancing people’s wellbeing, it is important to consider who is providing the resources (internal or ODA), what is it being directed towards (transformational change or more of the same), and most importantly how is the broader environment being improved to enhance the likelihood of success.

As countries develop the ability to improve living conditions, health, and education, it is of material benefit to engage in internally-driven change by developing institutions that allow countries to be self-sustainable – so they have the internal capacity and resources to drive improvements. Supporting and accelerating this internally-driven development of institutions can be a very powerful (and alternative) role for ODA.

The principles of prosperity at a moment of global crisis

If this time is about anything, it is for each nation to decide its character and who it wants to be. The decisions we make now will create the foundation for our…

Estonia has seen considerable improvements across all four pillars of the Inclusive Societies domain. In particular, personal and family relationships have…

African success stories that offer hope for the continent

The region still faces many significant challenges, but certain countries in this vast continent are witnessing something of a quiet transformation.

Why a strong social contract is the best means of tackling systemic corrupt...

For more than a decade, the Legatum Prosperity Index has measured nations’ progress in cultivating the many components that comprise a strong social contract,…